The U.S. is effectively a global pariah in the international fight against climate change. But other developed nations are stepping up and taking steps to mitigate climate change in the absence of U.S. engagement and leadership.

The 'U.S. lobbying' referred to is the presentation at the U.N. climate conference in Bonn entitled "The Role of Cleaner and More Efficient Fossil Fuels and Nuclear Power in Climate Mitigation". White House energy policy adviser George David Banks gamely responded to singing activists protesting the presentation with this quip: "Excellent singing. I think we should do karaoke after this."

Though some reports suggest that we must rely on fossil fuels while renewable energy output is expanded, the optics were somewhat unfortunate to say the least, with Michael Bloomberg tweeting this about the event: 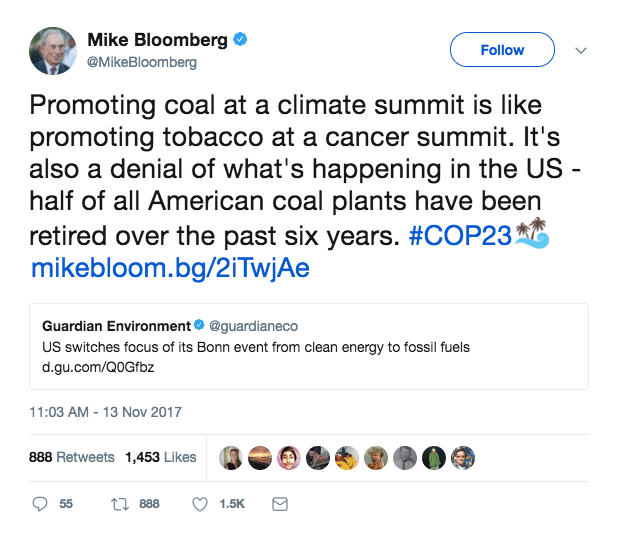 While Britain and Canada are pursuing a global coal phase-out, China and India are offsetting the Trump administration's inaction by supporting stronger climate policies. In fact, these two countries may even outperform their objectives:

The U.S. still has some like-minded friends, however.

Is the U.S. destined to wander in the wilderness of climate denial for all time? John Abraham of The Guardian sees reason for optimism in, of all places, Al Gore's sequel to An Inconvenient Truth. But first, he notes the bad news:

"The election in the US was a climate disaster and it is turning out to be worse than we could have feared. The US President and Congress are doing everything they can to ensure more rapid and devastating climate change."

And the good news? Abraham notes:

Scientists identify parts of ocean suitable for seaweed cultivation and suggest it could constitute 10% of human diet to reduce impact of agriculture.

When will we hit peak fossil fuels? Maybe we already have

Kingsmill Bond, energy analyst and author, describes the circumstances that hastened the transition of the electricity sector—plus four reasons he’s optimistic about our planet’s future.

'Vegan,' 'sustainable': How to spot greenwashing in fashion

Virtuous proclamations and campaigns from clothing brands can often amount to greenwashing, or in some cases, “clearwashing,” where the information doesn’t tell consumers much.
Read the Full Article on

How do heavy metals like lead get in baby food?

The problem begins at the farm where plants draw toxins from the soil. There’s no washing them away.
Read the Full Article on

www.nytimes.com
US Department of Labor/Flickr

A copper mine could advance green energy but scar sacred land

Tribal groups are fighting an Arizona project whose backers say increasing the supply of copper, crucial to batteries, would reduce fossil-fuel use.
Read the Full Article on

As the Colorado River shrinks, Washington prepares to spread the pain

The seven states that rely on the river for water are not expected to reach a deal on cuts. It appears the Biden administration will have to impose reductions.
Read the Full Article on

www.nytimes.com
From our Newsroom

What happens if the largest owner of oil and gas wells in the US goes bankrupt?

Diversified Energy’s liabilities exceed its assets, according to a new report, sparking concerns about whether taxpayers will wind up paying to plug its 70,000 wells.

Paul Ehrlich: A journey through science and politics

In his new book, the famous scientist reflects on an unparalleled career on our fascinating, ever-changing planet.

California will soon have the largest oil drilling setbacks in the U.S. Experts say other states can learn from this move.

A corpse, woodworking dangers, plastic titans ... revisit the stories that stuck with our readers this past year.

What I learned reporting on environmental health in Pittsburgh in 2022